What are you looking for?

Chances are if you clicked onto this you are either visiting Columbus for a sports game or concert or live in the area and are looking to explore the arena district more… either way, WELCOME!

The Arena District in Columbus is steadily growing with a ton of future development plans in the works. Keep an eye on the Arena Districts website and social media (mine included!) for more updates on what is opening and being built in this awesome part of Columbus.

*** This article may contain affiliate links that I receive a small commission off of. As an Amazon Associate I earn from qualifying purchases. I always appreciate any support to keep this site running! Thank you!***

What is the Arena District

Construction has also started to build a soccer arena for the Columbus Crew in the Arena District as well. Hockey, baseball, soccer…. Arena District has something for everyone!

Nada – “Snag guacamole and salsa to share, and dig into tacos and mac n’ cheese at Nada. Margaritas on draft and local craft brews fuel the party from the patio to the bar and private room. Get energized with Modern Mexican for lunch, dinner and weekend brunch. ”   The spicy mac n cheese is my favorite!

The Half Pint – “The Half Pint features a large outdoor patio and an expansive draft and bottled beer selection. Signature appetizers, burgers, sandwiches, soups, and salads as well as brunch offerings on Saturday and Sunday.”

Big Bang Dueling Piano Bar – “Two grand pianos. Tons of comedy. Plenty of audience participation. This piano bar is for people who love to go out, enjoy live music, and have fun! ”  This bar can be a whole night by itself – endless entertainment.

Whistle & Keg – “Whistle & Keg, based out of Youngstown, Ohio, is a taproom with a pour-your-own concept featuring 50 self-serve taps. The taproom has an open food policy allowing guests to bring their favorite food or get food delivered while enjoying a selection of local and regional craft beers, wines, ciders, mead, kombucha and more. Patrons can expect a fun and inviting atmosphere with live music, comedy, events and more.”     They just opened this weekend and I had so much fun at their opening! Such a unique and fun concept.

As you can probably tell the Arena District is so much more than just hockey games! There are so many awesome live concerts and shows (including fun family friendly ones) that I can’t really even begin to list them all. Even if you don’t want to go to a show or sports game there are still so many restaurants and bars that you can enjoy the Arena District without paying for a ticket!

Parking costs range anywhere from $10-20 per event depending on how close you park to Nationwide Arena and the demand of the event. Usually I end up paying $15 for the whole night which isn’t too bad! 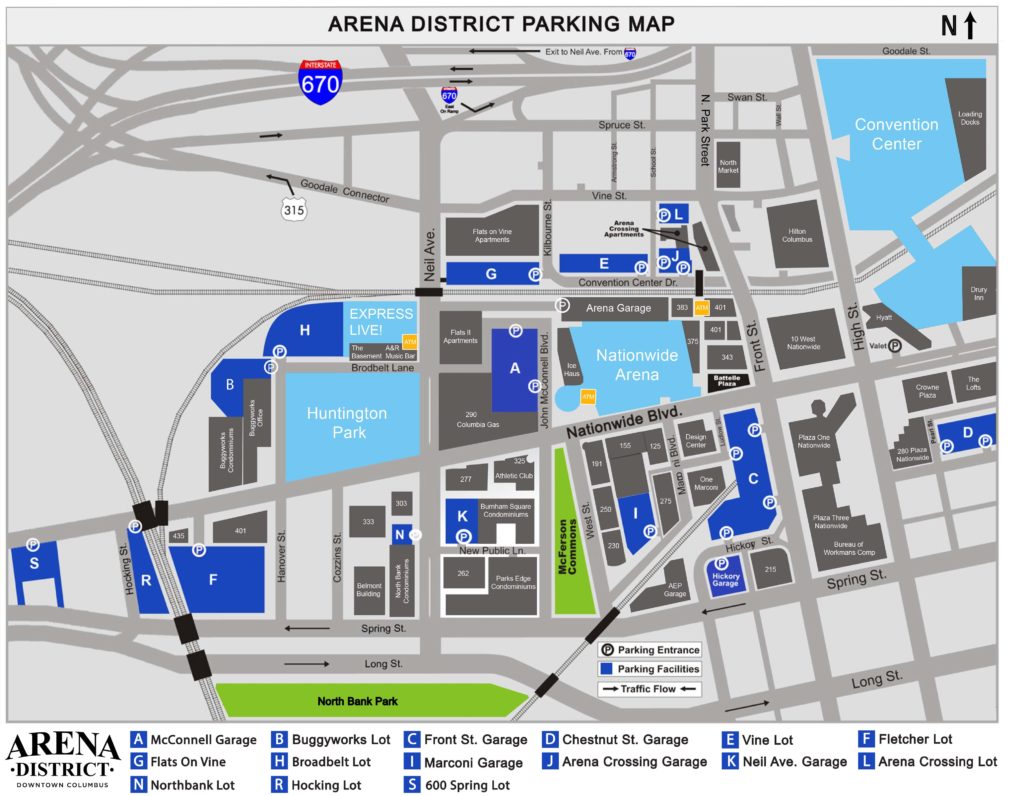 There is even a Park and Dine option:

Dine at select Arena District restaurants & park for only $3 for the first two hours in the Marconi Garage!

Have you been to the Arena District in Columbus before? What did you see? Where did you eat? Let me know!

I'm Korra-Shay and welcome to my site! Here you will find all the advice you want about creating your best life. From self improvement to lifestyle posts with even a little blogging tips sprinkled in! 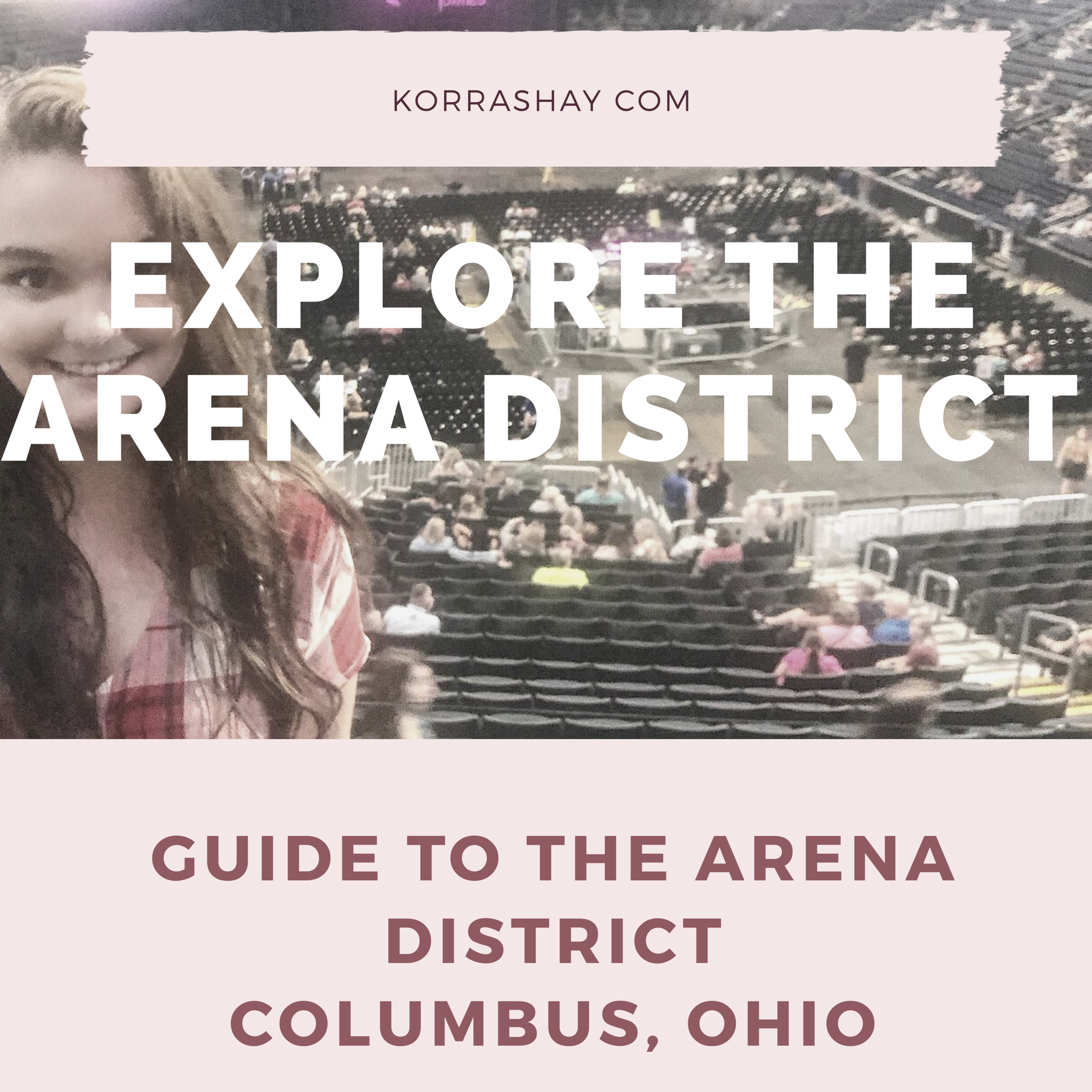 Guide to Arena District in Columbus

We use cookies on our website to give you the most relevant experience by remembering your preferences and repeat visits. By clicking “Accept All”, you consent to the use of ALL the cookies. However, you may visit "Cookie Settings" to provide a controlled consent.
Cookie SettingsAccept All
Manage consent

This website uses cookies to improve your experience while you navigate through the website. Out of these, the cookies that are categorized as necessary are stored on your browser as they are essential for the working of basic functionalities of the website. We also use third-party cookies that help us analyze and understand how you use this website. These cookies will be stored in your browser only with your consent. You also have the option to opt-out of these cookies. But opting out of some of these cookies may affect your browsing experience.
Necessary Always Enabled
Necessary cookies are absolutely essential for the website to function properly. These cookies ensure basic functionalities and security features of the website, anonymously.
Functional
Functional cookies help to perform certain functionalities like sharing the content of the website on social media platforms, collect feedbacks, and other third-party features.
Performance
Performance cookies are used to understand and analyze the key performance indexes of the website which helps in delivering a better user experience for the visitors.
Analytics
Analytical cookies are used to understand how visitors interact with the website. These cookies help provide information on metrics the number of visitors, bounce rate, traffic source, etc.
Advertisement
Advertisement cookies are used to provide visitors with relevant ads and marketing campaigns. These cookies track visitors across websites and collect information to provide customized ads.
Others
Other uncategorized cookies are those that are being analyzed and have not been classified into a category as yet.
SAVE & ACCEPT
Loading Comments...